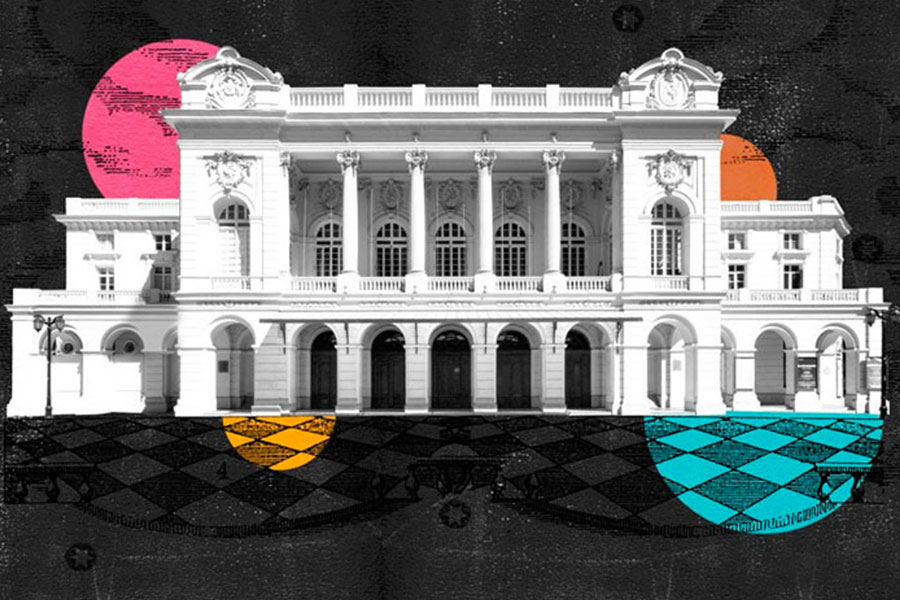 An attractive lyric season 2016 is the one announced on Monday, September 28, the Municipal Theater of Santiago, occasion in which the ballet titles and the works of the concert repertoire that next year will offer the main opera stage were also announced in Chile. The news – which included a graphic campaign with illustrations by the artist Rodrigo Díaz Carrizo, such as the one that accompanies this text – was announced by the general director Andrés Rodríguez, who will continue in this position until December 2015, and from January 2016 , and after more than three decades at the head of the lyric coliseum, it will be succeeded by the French Frédéric Chambert, who is currently the artistic director of the Capitole Theater in Toulouse.

.
Six titles will make up the opera season, and each will be offered with two deals: the international cast and the so-called star cast. The cycle will include two classics that always summon the public, such as La traviata de Verdi and La bohème de Puccini, but also bet on less frequent titles in the Latin American repertoire and even premieres in Chile.

.
The lyric season will open with the return, after more than three decades, of the famous Ponchielli La Gioconda, which will be performed between May 11 and 23, directed by the head of the Santiago Philharmonic Orchestra, Konstantin Chudovsky, with Jean-Louis Grinda regime and a cast starring Elisabete Matos, Alfred Kim, Geráldine Chauvet, Sergei Murzaev and Sergei Artamonov.

.
Then it will be the turn of another work of the twentieth century that still had its premiere pending in Chile and finally arrives at the Municipal, in co-production with the Colón of Buenos Aires and the Teatro Mayor de Bogotá: Rise and fall of the city of Mahagonny, de Weill, which will have functions between June 23 and July 1. The production will be headed by the same artistic team that has already garnered praise on that stage with the local premieres of Billy Budd in 2013 and this year in The Race of a Swinger: British Orchestra Director David Syrus and an Argentine Scenic Team headed by the régisseur Marcelo Lombardero. The cast will feature singers such as Susanne Resmark, Kim Begley, Gregg Baker, Gan-Ya Akselrod, Nikolai Schukoff and Paul Kauffmann.

.
With performances between July 23 and 30, the third title of the opera season, Tancredi, by Rossini, will also be a real novelty, for various reasons: starting, because it is a work that is not represented in Chile since 1845, when the Municipal was not inaugurated yet, so it will also be another premiere on that stage; and also because in the Municipal the only scenic works of this Italian author that are usually represented are comedies, so this will be an excellent opportunity to appreciate live a serious opera rossiniana. Even more so considering that the assembly, co-produced with the Lausanne Opera, will be headed by the régisseur Emilio Sagi, who this year won a real triumph in the Municipal with another rossiniana piece, The Turk in Italy; Together with his usual stage team, the Hispanic artist will give the theater to a cast that will be directed by Briton Jan Latham-Koenig (former head of the Santiago Philharmonic) and will feature singers Marianna Pizzolato, Nadine Koutcher, Shi Yijie and Pavel Chervinsky.

.
After Tancredi, the soprano Koutcher, who in 2016 returns to the Municipal after his applauded debut in 2013 with The Puritans and this year won the first place in the prestigious international singing contest Cardiff Singer of the World, will continue in Chile to then star, between August 12 and 25, the popular La traviata, which will be offered in a new production by Chilean Pablo Núñez, with musical direction by Konstantin Chudovsky and a cast that will also feature Sergei Romanovskiy and Igor Golovatenko.

.
And the fifth title will be another classic always loved by the public: from September 7 to 15, La bohème pucciniana will return, again in the well-known production of the legendary Nicola Benois, now with the regime of Patrizia Frini and with the musical direction of the Chilean José Luis Domínguez . Eri Nakamura, Rame Lahaj, Catalina Bertucci, Vittorio Prato, Andrey Zhilikhovsky and Oleg Budorotskiy will sing in the main roles.

.
And the lyric cycle 2016 will end with another work that returns after a long time, The Condemnation of Faust, by Berlioz. In fact it has not been presented in Chile for almost a century, since the last time it was offered at the Municipal was in 1918. It will be represented between November 2 and 12, directed by the Chilean teacher Maximiano Valdés, with a setting on the scene of also Chilean Ramón López and a cast starring Anthony Kalil, Alfred Walker, Geráldine Chauvet -also present at the beginning of the season in La gioconda- and Argentina’s Hernán Iturralde.

All the information about the 2016 season of the Municipal de Santiago is now available on the website of the theater, www.municipal.cl