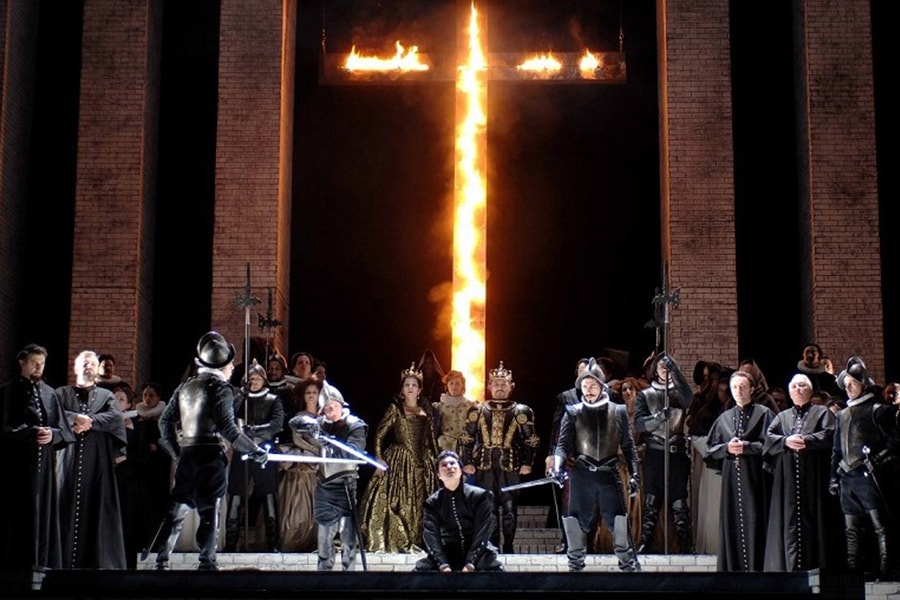 The 2019-2020 Season of Teatro Real de Madrid will offer 12 titles: 6productions own ─including 2 chamber operas in the Slaughterhouses and in the Teatros del Canal─, 5 invited productions and 1 in concert version. Of these operas, 7 are new additions to the repertoire of the Teatro Real.

.
They will premiere in Spain La Pasajera, by Mieczyslaw Weinberg; Lear, by Aribert Reimann; and Three Tales, by Steve Reich. The work Into the Little Hill, by George Benjamin, will be offered for the first time in Madrid.

.
The masterpiece of the Spanish Baroquerescued from oblivion Achille in Sciro, by Francesco Corselli, will be, in a new production of the Teatro Real from the edition of the Complutense Institute of Musical Sciences.

.
tetralogy TheThe Ring of the Nibelung, by Richard Wagner, with The Valkyrie, always with musical direction by Pablo Heras-Casado and staging by Robert Carsen, continues.

.
They will be presented for the first time at the Teatro Real Il Pirata, by Vincenzo Bellini, in a co-production with La Scala in Milan, and Iris, by Pietro Mascagni, this one in a concert version.

.
The great operatic titles will be very present in the new season: The Magic Flute, by Wolfgang Amadeus Mozart; L’elisir d’amore, by Gaetano Donizetti; Don Carlo and La Traviata, by Giuseppe Verdi; and the aforementioned La Valquiria, by Richard Wagner.

The Royal Theater Orchestra, under the tutelage of its musical director, Ivor Bolton, along with Pablo Heras-Casado, first guest conductor, and Nicola Luisotti, associate director, and the Royal Theater Choir, directed by Andrés Máspero , they will greatly expand their repertoire, consolidating the prestige of the stable bodies of the Theater.

.
The Real Junior offer seven different productions ─marionetas formats, circus, music stories, silent films, etc.─ for different ages; 18 family workshops Everyone at the Gayarre! and children’s workshops for opera and costumes, in summer. All the shows will be offered to schools and many of them will be broadcast on screens throughout Spain, reaffirming thecommitment Teatro Real to education, training and consolidation of children and young people.

.
The Dance Program will bring three renowned companies to the Teatro Real: the English National Ballet, with Giselle; the National Ballet of Spain, with Electra; and the Nederlands Dans Theater, with Jubilee, a program that will celebrate its 60th anniversary.

.
The dialogue with other types of music is strengthened, with the sixth edition of the Universal Music Festival, in July 2020, and the second edition of the Flamenco Real series, with performances throughout the entire season.

.
The Teatro Real will increase the national and international diffusion of its programming through the increase of audiovisual broadcasts and recordings and the renovation of itsstreaming platform Palco Digital.

DATA AND FIGURES
A total ofwill be offered 238 functions: 110 opera functions divided into 12 titles; 12 dance performances with 3 different companies, 5 concerts and lyrical recitals; 101 functions for children and young people; 7 concerts of ‘The Sundays of camera’ and 3 projections of ‘Opera in Cinema’.

.
The children’s and youth programming is made up of 7 shows conceived for different ages and 18 musical workshops. All to the Gayarre!

.
More thanwill be offered, 30 free activitiesincluding exhibitions, recitals, talks and lectures at the Teatro Real and cultural institutions in Madrid, as well as live opera broadcasts in squares, cinemas, auditoriums and cultural and school centers throughout Spain.