Norma returns to the Municipal of Santiago 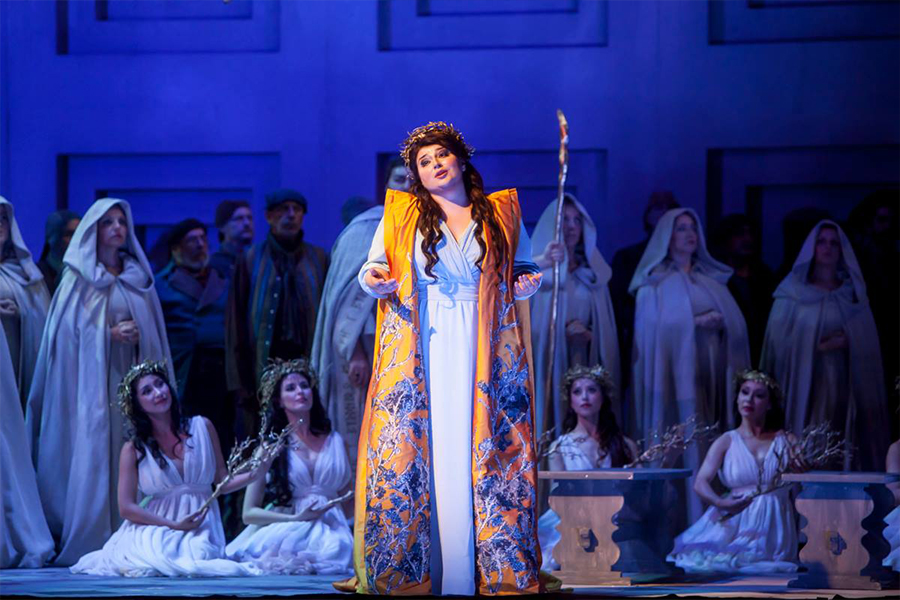 With the musical direction of Konstantin Chudovsky and Pedro-Pablo Prudencio, next to the Reggio de Francesca Zambello, the jewel of Bellini’s romantic bel canto returns to close the Lyric Season 2018 of Municipal de Santiago from 07th to 17th November

After 18 years Norma returns to the Municipal of Santiago. Written by Vincenzo Bellini and considered by him as his best opera, this gem of romantic bel canto tells the story of Norma, the priestess of the Druids who sacrifices herself for love.

The works of Bellini stand out for being specially designed for the prominence of their singers, appropriate to the types of voice in extreme form. Absolute protagonist, active and independent, Norma is one of the most exposed and demanding roles of the lyric. In this opera, Bellini’s renowned talent for composing long melodies is especially evident in “Casta Diva”, one of the best-known soprano arias and has been used countless times in film and advertising.

ABOUT THE VOICES
Municipal de Santiago is not the first to try to presentversion Norma’s with two sopranos in the central roles. Riccardo Muti already did it in 1978 in Florence: Renata Scotto sang Norma and Margherita Rinaldi, the role of Adalgisa. Scotto also sang with Mirella Freni as Adalgisa, a version that can be partially heard on the internet. Montserrat Caballé recorded the role in 1984 with Joan Sutherland as Norma.

.
The international cast will be starring Irina Churilova and Oksana Sekerina in the roles of Norma and Adalgisa, respectively. On a rainy day in November 2016, Irina arrived in Berlin from Novosibirsk and Oksana, from Moscow. The two had auditioned for the Municipal, but they wanted to discuss with them the original version of Norma and work the duets in the original notes. After a long work session the decision was made.

.
Irina is Valeri Guérguiev’s favorite prima donna and spends most of her time at the Mariinskiy Theater in Saint Petersburg, with which she also makes important international tournaments. In the Mariinskiy he sings an ample repertoire, that goes from Liù and Micaela to Elizabeth in Tannhäuser and Lisa in the lady of spades. Last year she had a personal triumph like Elena in Verdi’s Sicilian Vespers, the same role of dramatic, diabolically difficult coloratura with which Maria Callas became Prima Donna Assoluta in 1951 at the Teatro del Maggio Musicale Fiorentino. In December of that year he inaugurated La Scala with the same role under the legendary Victor de Sabata. Irina also sings at the Bolshoi in Moscow and recently sang in Berlin, in Madrid and Barcelona, ​​and at the Arena di Verona. Next June he will be in a new production of A masked ball in Geneva.

.
Oksana Sekerina sang a wonderful Donna Anna at the opening of the season in Santiago, for Don Giovanni. The same role with which the first Adalgisa, Giulia Grisi, became famous. Oksana sang the same role in the Bregenz Festival and has a wide repertoire of lyric soprano, such as the Countess in The Marriage of Figaro and Tatiana in Eugenio Onegin, not only in Russia but in Graz, Austria.
.
For the star cast, Elizabeth Baldwin has been chosen for Norma. Two years agosang Lady Macbeth Verdi’sin New York and sang roles as Tosca, Tatiana, Ariadna in Naxos in Pittsburg, San Jose and Miami, where she also recently sang the role of Sieglinde in The Valkyrie at the Wagner Festival.
.
Vlada Borovko,starlet theAdalgisa of the stellar cast, graduated from the Jette Parker Young Artists Program in London, where she currently studies the Chilean Yaritza Véliz. At the Royal Opera House she sang small roles, but also made Musetta in La Bohème and Violetta in La Traviata. Last year Violetta sang at the Oper Köln.
.
For Pollione a more traditional option was chosen because today it is very difficult to find a tenor in the Rossini style with the qualities and technique of Donzelli and, on the other hand, it could be difficult to accept for the public.
.
Sung-Kyu Park sings all the great spinto roles, such as Turridù, Radamès, Riccardo in A mask danceand Gabriele Adorno in Simón Boccanegra, in all the great opera houses: Trieste, Palermo, Prague, Bilbao and Tokyo, among others. Last year he sang Calaf at the Royal Opera House in London.
.
However, for the star cast we wanted to try to offer the public at least an approximation to the Bellini period: Kirill Zolochevskiy, the star Pollione, is a young tenor who studied at the prestigious Tchaikovsky Conservatory in Moscow. Even at the Conservatory he sang Lensky and many other roles of the Russian repertoire. Now he is a member of the Stanislavsky Theater, where he has sung small roles and character, but also Arturo in Lucia di Lammermoor and Nemorino in El elixir de amor. Interestingly, Kirill is currently preparing two rossinian roles: Lindoro from La italiana in Algiers and Ramiro from La Cenicienta. Perhaps we have here a little echo of Bellini’s time, when all the tenors sang Rossini.
.
Ievgen Orlov came to Santiago directly from Operalia to sing Don Basilio in 2013, standing out for his “imposing volume, projection and color” (El Mercurio). He sings regularly in Berlin and in the MET, where he has also played Oroveso.
.
Önay Köse auditioned almost three years ago at the Juilliard School of Music in New York. We thought it would be good to have a Oroveso more or less the same age as Vincenzo Negrini when he sang the world premiere of Norma. Since his audition, Önay has become a rising star in the world of international opera. In Berlin he has sung roles as Don Basilio, the Commander in Don Giovanni and Sarastro. In Toronto he sang Colline in La Bohème and Ludovico in Otello. In Frankfurt he made Sparafucile, and in Cologne, Timur in Turandot. Recently,also sang Mephistopheles in Faust, Gounod’s under the leadership of the great French director Michel Plasson.

For more information and to buy your tickets, click here.