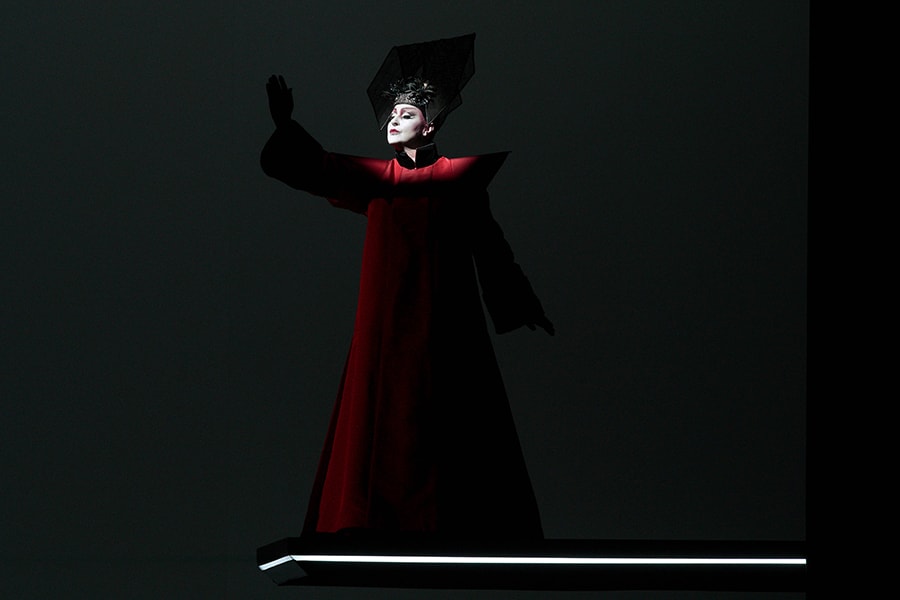 There will be 18 performances of the opera dedicated to the memory of Montserrat Caballé, in a new co-production of Teatro Real with the Canadian Opera Company, the National Theatre of Lithuania and the Houston Grand Opera. Bob Wilson assumes the stage direction, set design and lighting, next to the musical direction of Nicola Luisotti

Teatro Real will offer, between 30th November and 30th December, 18 performances of a new production by Turandot, by Giacomo Puccini, in co-production with the Canadian Opera Company, the National Theater of Lithuania and the Houston Grand Opera, which will be will premiere in Madrid before going to the other theatres.

Turandot, was performed in the first season of the reopened Teatro Real with musical direction by Wladimir Jurówski and stage by Jeremy Sutcliffe; and with Jane Eaglen, Vladimir Galouzine and Verónica Villaroel in the main roles, he returns, 20 years later, with stage direction, set design and lighting by Bob Wilson, whose personal theatrical universe gives the opera a spectral aura very close to the sound universe of the score, which evokes an ancestral world of oriental reminiscences, far removed from the realistic approach of Puccini’s earlier operas: Manon Lescaut, La Bohème, Tosca, Madama Butterfly, La fanciulla del West, La rondine, Il trittico, etc.

The charismatic visual and dramaturgical language of Wilson, with backlit silhouettes, masks and almost ritual movements, is the ideal to tell the legend of the bloodthirsty Chinese princess, framed in his ‘natural’ stage space, which connects directly with the millenary theater of oriental shadows.

The characters thus become legendary and hieratic archetypes, and Wilson’s subtle light palette is recreated with the orchestral colors of Puccini and with poetic synesthesia ranging from the glacial tones of the ruthless protagonist to the warm tones of Liù’s recollection, whose death, in the score, coincides with that of the composer himself, who leaves the work unfinished.

Two casts alternate in the interpretation of the 18 performances of Turandot, which bring the Real, once again, to Nicola Luisotti, its associate musical director, whose relationship with the Theater began 10 years ago with Il trovatore, and which we have seen in recent seasons with Rigoletto and Aida. After his triumphs with Verdi, Luisotti will again be in charge of the Choir and Orchestra Holders of the Royal Theatre ─ and also of the Little singers of the ORCAM─ to give life to the great score by Puccini.

They head the cast of Turandot two sopranos who make their debut at the Teatro Real: the Swedish Irene Theorin and the Ukrainian Oksana Dyka, both acclaimed interpreters of the titular role of the opera. They will be seconded by the Spanish sopranos Yolanda Auyanet and Miren Urbieta-Vega, as Liù; the tenors Gregory Kunde, Roberto Aronica and Jae-Hyoeung Kim, who will alternate on the role of Calaf, and bassists Andrea Mastroni and Giorgi Kirof, who will play Timur.

Turandot says goodbye to the rich Italian operatic tradition that, like a phoenix, would open new paths in the development of dramaturgic music, which was taking its first steps in the immense world of cinema, today, so close to opera.

Giacomo Puccini died in Brussels in 1924, when he underwent throat cancer treatment. He was then at a crossroads to conclude the third act of Turandot, with a surprising happy ending in which love triumphs over perfidy. His disciple, Franco Alfano, was responsible for concluding the score from the sketches and notes left by his teacher and under the careful supervision of Arturo Toscanini, who directed the posthumous opening of the opera at La Scala in Milan, in 1926, in a famous representation in which the Italian director abruptly cut the interpretation ─after the adage that the chorus intones after the death of Liù─ and addressed the audience saying: ‘Qui il Maestro finí’ (Here ended the teacher). In the successive functions the end of Alfano has been used, which is the one that since then is normally used, although Luciano Berio wrote another version released in 2002 in Salzburg.

In Turandot, Giacomo Puccini takes a huge leap forward in his compositional writing: he moves away from realism and his brilliant Manichaeism of emotions and explores a new dramaturgic universe with its exhilarating art of orchestration, its eclecticism and its marvelous theatrical sense of smell. The opera intertwines epigrammatic motifs with an impressive dramaturgical effectiveness, granting the choir a dramatic relevance unknown in its earlier operas. Explore more audacious harmonic universes with bitonal and dissonant passages articulated with their proverbial melodicism, opening a flourishing path truncated by their sudden death.

Turandot will be recorded in a co-production of the Teatro Real with BelAir Media, together with RTVE and France Television, and subsequently distributed internationally on the Internet, television and DVD. In addition Radio Clásica, of RNE, will retransmit in delayed Turandot, in date to determine.