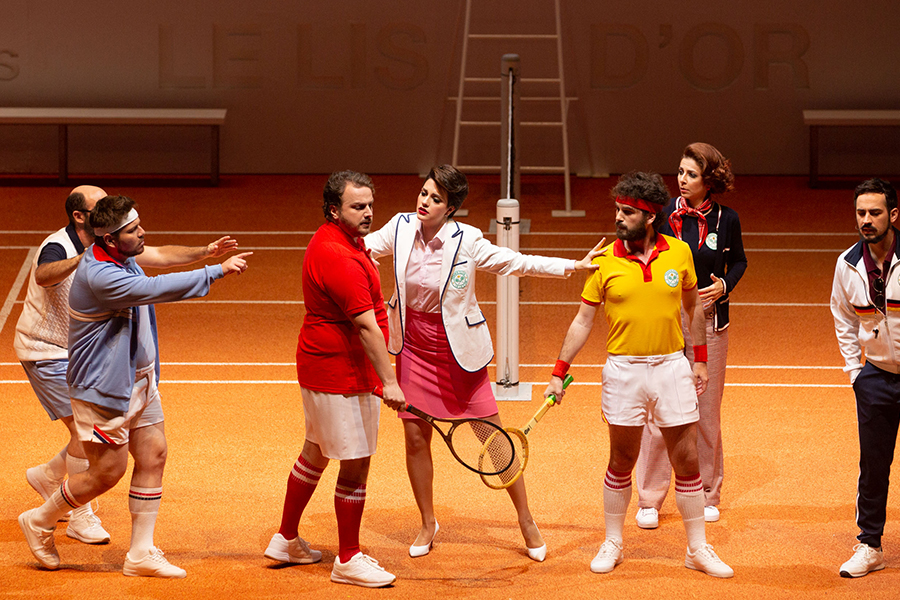 Rossini’s Opera buffa staged at Auditorio de Tenerife, under the baton of the musical director Yi-Chen Lin and the stage direction of Stefania Bonfadelli

Ópera de Tenerife presents the third title of the season, Il viaggio a Reims (The Journey to Reims) by Rossini, which will be staged on Saturday, December 15th, at the Symphony Hall of the Auditorium of Tenerife. It is a special production because the cast is made up of singers who have participated in some of the editions of Opera (e) Studio, all of them with internationally projected careers after their stay on the island.

.
The details of this new production were announced by the Insular Director of Culture and Education of the Cabildo de Tenerife, José Luis Rivero; the maestro Giulio Zappa and the stage director, Stefania Bonfadelli. Rivero explained that “we are celebrating because we commemorate the first five years of our Opera (e) Studio; all the students that have passed through that academy are currently in the international race and with the best cast that an opera house could have. ”

.
Rivero stressed that the people in charge of the different artistic departments are occupied by women. “This is no accident, since from Opera de Tenerife we ​​have been working during these years to make women visible and put in the rightful place in the world of opera.” The insular head of Culture concluded by stating that this production “is fun, intelligent, as well as a demonstration of beauty and good work.”

.
Giulio Zappa believes that “Opera (e) Studio has increased the level and quality every year; we have gathered a large part of the total number of participants, which have been 70 out of 17 countries in these five years “. On the trip to Reims, the teacher points out that “he reflects an idea of ​​internationalization and cultural unification within the framework of music” and explains that “since this title was a commission for the celebration of the coronation of Charles X, Rossini had the best singers of the moment, had the great divos at their disposal. That is why the result entails a great difficulty, because it is made for great singers, who also have to adopt the stereotypes of the different nationalities and transmit them with their voice “.

.
The stage director Stefania Bonfadelli recognizes that “when Tenerife Opera Intendent, Alejandro Abrante, invited me to this production, I was very excited because I love Rossini and in particular this title”. Bonfadelli believes that “the context, the coronation of Charles X of France, was a bit old, and we had to think about a current dramaturgy” and points out that “this masterpiece has several fundamental points: Europeanism, internationality of the characters and the figure of the king “and for that reason he thought that only in the sport all the nationalities are united,” the countries and their champions unite, the divos of the sport, they are the new kings of the present societies; that’s why I’ve thought about making The Journey to Reims a great tennis championship, set in the 80’s. Thus, it takes place in a club where international players come and Carlos X is redefined as a tennis star, the King of France with the racket”.

.
The musical director Yi-Chen Lin, born in Taiwan, directs her second title in Ópera de Tenerife (Le nozze di Figaro, Mozart, 2015) and is again in charge of the Tenerife Symphony. Since his debut at the Wiener Musikverein in Vienna, he has directed the main symphony orchestras and, among the most important premieres in the field of opera, are the São Carlos National Theater in Lisbon, Carmen (Bizet) at the Teatro de la Zarzuela of Madrid, La Cenerentola (Rossini) at the Donizetti Theater of Bergamo, Le nozze di Figaro (Mozart) at the Teatro Comunale di Bologna and Il viaggio a Reims at the Rossini Opera Festival.

.
The Canarian soprano Silvia Zorita spoke on behalf of the singers involved in this title. “Going back to work with Ópera de Tenerife is always a pleasure and a pride; Many of us have started our careers here in the Opera (e) Studio editions and it is very special. We are all here to give everything and for the public to enjoy. “

.
The effort made during these seasons by Ópera de Tenerife is reflected in the recognition received this year by the European Commission that has integrated the Opera (e) Studio project under the Creative Europe program, granting it the maximum possible subsidy for the organization of the next edition, in which Tenerife leads a project in which it has Bolonia and Tbilisi as partners.

.
Opera de Tenerife this week proposes a hilarious trip to Reims accompanied by European aristocrats where we will discover their rivalries, affinities, loves and scorn. The trip to Reims, premiered at the Téâtre Italien in Paris on June 19th, 1825, was commissioned to Rossini on the occasion of the coronation celebrations of King Charles X of France. What was a stage cantata for four performances, has become an assiduous title in the operatic repertoire of all the theaters of the world, especially since its re-release in 1984 at the Pesaro Festival, under the direction of Claudio Abbado.

.
The costumes, designed by Valeria Donata Bettella, are inspired by the clothing of sportsmen, workers and assistants to the Grand Slam of the eighties. In the former we find a clear influence on the aesthetics of tennis players such as Andre Agassi, Boris Becker, Ivan Lendl and, especially, John McEnroe.

With Rigoletto, Ópera of Tenerife pays tribute to Alfredo Kraus