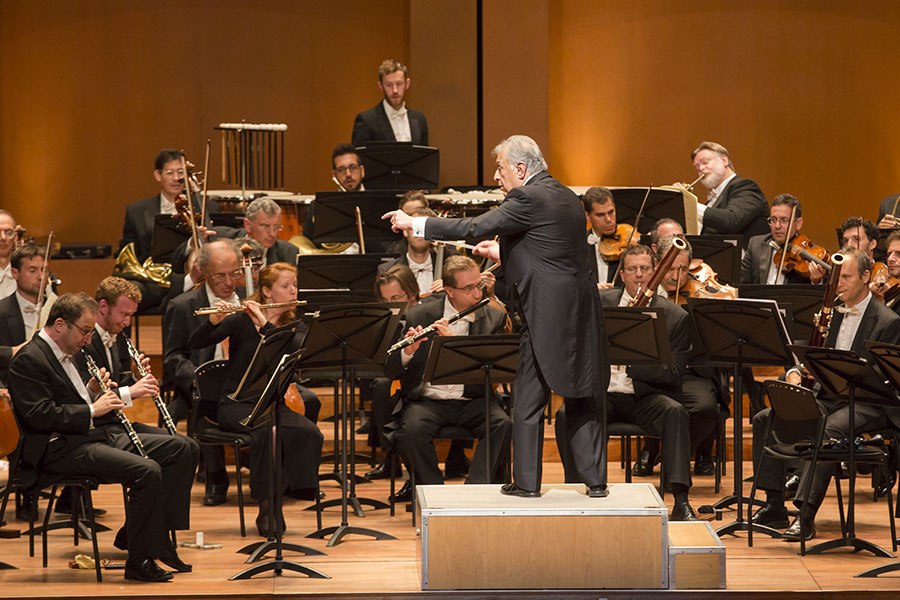 The platform will also expand its offer with shows from theatres that are members of OLA Network on the occasion of the global contingency.

Teatro Mayor Julio Mario Santo Domingo, during this time of health emergency, will expand the offer of Teatro Digital. Some of the best national and international shows of its programming are broadcast on this platform, which can be accessed for free from any device connected to the internet and that during this period will broadcast a new show every Thursday.

Premiers at 8 pm at Colombia.

July 30 to August 06: Israel Philharmonic Orchestra, under the direction of maestro Zubin Mehta.

Conect to a Teatro Digital

Through its digital platforms, Teatro Mayor Julio Mario Santo Domingo has not stopped its inclusive artistic offer despite the isolation dictated to slow the advance of the coronavirus (Covid-19). During this situation, every Thursday a new show has been broadcast through Teatro Digital, an initiative of Bancolombia and the Teatro Mayor, which seeks to provide access to performing arts programming beyond the theater.

In July, this commitment to bring the best of the performing arts to the screens of all Colombia will continue with an offer that will have great productions of opera, dance, classical music and fado.

Programming will begin on July 2, at 8 p.m. m., with the concert of the Portuguese singer of South African origin Katia Guerreiro, one of the main fado figures today. The artist performed at the Teatro Mayor at the 2018 Fado Festival, a co-production with Alto E Bom Som and Everything is Now.

Guerreiro, who has sung on stages in countries such as France, Morocco, Belgium, England, Wales, Egypt, Switzerland, Spain and Norway, performs at this concert a tour of his album Até ao Fim, in addition to having the presence of a guest special. The broadcast is framed in the strip Great shows.

On July 9, the turn will be for the Alzira opera, of Gran Teatro Nacional of Peru, which is part of the Venta de América strip. This production premiered in 2018 and was the first international co-production of the Grand National Theater, together with the Bilbao Association of Friends of the Opera (ABAO) in Spain and the Opera Royal de Wallonie-Liége in Belgium.

Alzira has the striking characteristic of being the only Giuseppe Verdi opera that takes place in Peru. The piece is inspired by the novel Alzira and the Americans by Voltaire and its history, which takes place in the Viceroyalty of Peru, is a call for freedom: the native peoples unite to resist the invading forces and liberate Alzira and its father Ataliba, who are held captive in the capital.

This version proposes a contemporary re-reading of history, with a dialogue between the history of viceregal Peru and the 1920s. In this way, a period of conflict between the aristocratic government and the native peoples is exposed, in an abstract space that represents the desecrated and violated earth.

In the framework of the Great Shows strip, from July 16 to 23 you can enjoy Retablo, the most successful production of the National Cast of Folklore of Peru, which was presented at the Teatro Mayor in 2018. More than fifty dancers, who make an exhibition of nineteen traditional Peruvian dances, accompanied by symphonic stringed instruments, wood, metal and percussion.

Lima, Amazonian, Cusco, Afro-Peruvian, Puno, Northern and central Sierra of Peru dances, as well as the live performance of their music and more indigenous sounds, are part of the program.

Continuing with Great Shows, from July 23 to 30, you can see the presentation of the Scottish Dance Theater, one of the groups that starred in the UK Guest of Honor season at the Teatro Mayor in 2019.

Scottish Dance Theater is the main contemporary dance company in Scotland and in its show it merges two choreographies by important European creators: TuTuMucky, by the British Botis Seva, and Ritualia, by the Scottish Colette Sadler.

TuTuMucky is based on rhythms like ballet, contemporary dance and hip-hop, presenting a different and innovative dance style; while Ritualia is a modern interpretation of the ballet Les noces, by Stravinsky and Nijinska, which premiered in Paris in 1920.

To close the month, Teatro Digital will have as a guest one of the most important classical music groups in the world: the Israel Philharmonic Orchestra, under the direction of maestro Zubin Mehta.

This broadcast, which is part of the Harmony Sura – Great Concerts strip, reproduces the presentation of the Israel Philharmonic at the Teatro Mayor last year, which took place on the farewell tour of maestro Mehta as director of the group.

The Orchestra, which has also performed at the Teatro Mayor in 2013 and 2016, performed Joseph Haydn’s Concertante Symphony in B flat No. 105 and Symphony No. 1 in D major, ‘Titan’ by Gustav Mahler.

Teatro Digital will offer the opportunity to relive that historic concert, not only because of the quality of the performances, but also because of the high emotional charge that it meant to see Mehta in one of his last performances together with the orchestra that he conducted for fifty years.

All the shows will be available for a week and users can connect at any time through the page www.teatrodigital.org and the official Facebook account of the Teatro Mayor. The platform’s programming is divided into four bands: Ours, with presentations by the great references of Colombian music; Window of America, made up of shows from Ópera Latinoamérica OLA theater network; Great shows, which highlights the large-scale productions that have gone through the programming of the Teatro Mayor, and Armonía Sura, which groups together the great concerts of the most important classical music orchestras in the world.

Teatro Digital, a social initiative of Bancolombia and Teatro Mayor, can be tuned in from any device connected to the Internet. Thanks to the Digital Theatre, the public can have a very high quality experience in video and sound through a platform streaming,which allows adjusting the quality of the video depending on the type of connection the viewer has: from HD to low resolution.

Una oda al tiempo, by the renowned Spanish flamenco dancer and director María Pagés. Through a sensitive choreography and an ingenious visual bet, Pagés stages a reflection on the passing of time and on the state of the art, in a show that draws on the traditions of Spanish dance, but also drinks from the sources of contemporary trends.

Lombardero proposes a contemporary vision of the protagonist’s story, inspired by the character of Don Juan from the theater play El burlador de Sevilla by Tirso de Molina. In this way, Mozart’s composition is told through avant-garde elements such as video projections, a wardrobe that It matches our times and an environment full of the excesses of modern societies.

The mezzo-soprano Joyce DiDonato, together with the ensemble Il pomo d’oro, presents the lyrical recital In War & Peace: Harmony Through Music, with arias from operas by baroque composers such as Händel , Leo, De Cavalieri, Purcell, Gesualdo and Pärt. The recording of In War & Peace: Harmony Through Music, made in 2017, received the Best Recital Award from Gramophone. This concert will be available on the platform from April 02 to 09.

Beethoven’s ‘Ninth Symphony’ returns to Teatro Digital with Wiener Akademie, to commemorate 250 years since Beethoven’s birth. Users will be able to connect to see one of the best known symphonies of the German composer, which premiered in 1825 in Vienna. Conducted by renowned organist and composer Martin Haselböck, the Wiener Akademie brings back the original sound and style of the 19th century to Beethoven’s latest symphony.

Teatro Mayor presents Monsieur Periné Filarmónico. This presentation stars the Colombian group Monsieur Periné, winner of a Latin Grammy award in 2015 as best new artist, and the Bogota Philharmonic Orchestra, under the baton of Andrés Felipe Jaime. With this special concert, in which Monsieur Periné’s sound commitment was brought to the symphonic format thanks to the performance of the nearly one hundred musicians of the Orchestra, the 481 birthday of Bogotá was celebrated in 2019.

Teatro Digital will begin a strip of international shows with “Swan Lake”, produced by  Municipal of Santiago de Chile. Thanks to the collaborative effort of the twelve theaters in Latin America that belong to Ópera Latinoamérica network, a program of digital transmissions has been designed that can be enjoyed throughout the continent during the coronavirus quarantine (Covid-19).

For this reason, the Teatro Mayor, through Teatro Digital, will broadcast the classic of universal ballet, with music by Tchaikovsky, arrangements by Albena Dobreva and directed by the Brazilian Marcia Haydée, emblem of Latin American dance.

Teatro Digital program will continue with the show Chau, goodbye electronic scrap, by the group Los Fi de Chile, directed by Josep Ramió. This show, aimed at the family audience, mixes percussion with objects, mainly disused electronics, and multimedia technology from repaired devices. The piece, which seeks to raise awareness about the importance of taking charge of electronic waste, is starred by eight artists who manage to create dynamic rhythm sequences through the simple elements of props and scenery.

Gala of the First Mariachi Festival, which will feature the singer Tania Libertad, Ricardo Torres and her Mariachi and Mariachi Colombia Nueva Era, two of the most mariachi ensembles important in Colombia. Libertad, who was born in Peru and became a Mexican national, has become one of the most recognized voices in Latin America, with a 50-year career in which she has achieved such important recognitions as Latin Grammy for Musical Excellence, which she received at the 2009. It is a unique concert, in which Libertad and the Colombian groups will take a tour of the classic ranchero repertoire.

Teatro Digital will have the flavor of the strip Ours with the retransmission of the launch of 51st Vallenata Legend Festival. During its ten years, the Teatro Mayor has become the stage for the launch of the most important music festivals that take place outside of Bogotá. In the case of La Leyenda Vallenata, at the launch of 2018 the winners of the previous festival were presented, which was dedicated to the Kings of Kings.

Shows on thestrip Ventana de América, which was born thanks to the effort Collaborative of more than 40 theaters and opera companies from Ópera Latinoamérica. From Teatro del Lago be broadcastor The Carnival of Animals, a work created by the French composer Camille Saint-Saëns in 1886 as a joke for a carnival day, will. In the piece, each instrument is associated with an animal, so lions, elephants, chickens, fish, turtles, among many others appear.

Nutcracker, the famous ballet of the Russian composer Piotr Ilyich Chaikovski that Ballet of Santiago de Chile presented at Teatro Mayor. This version of the classic story features the choreography by Jaime Pinto and the direction of the Brazilian Marcia Haydée, icon of Latin American dance.

In the production, which portrays the story of a nutcracker doll that comes to life on Christmas night, he participates in the Cali dancer José Manuel Ghiso, who has become one of the most important interpreters of the Santiago Ballet, to the point of become First Dancer of the Chilean company.

In June, Teatro Digital offer will end with a very special national guest, the Medellín Philharmonic Orchestra, an institution with 37 years of experience, whose purpose is to transform local and national territory with symphonic music in close proximity.

The orchestra, which in 2016 was nominated for a Latin Grammy in the category of Best Tango Album for the album Gardel Sinfónico with the Argentine singer Ariel Ardit, has as its special guest the Israeli conductor and pianist David Greilsammer.

Greilsammer, musical and artistic director of the Geneva Camerata of Switzerland, is considered one of the boldest classical musicians of today, thanks to works such as his solo recital Scarlatti: Cage: Sonatas, which The New York Times chose as one of the events. most important musical of 2014. 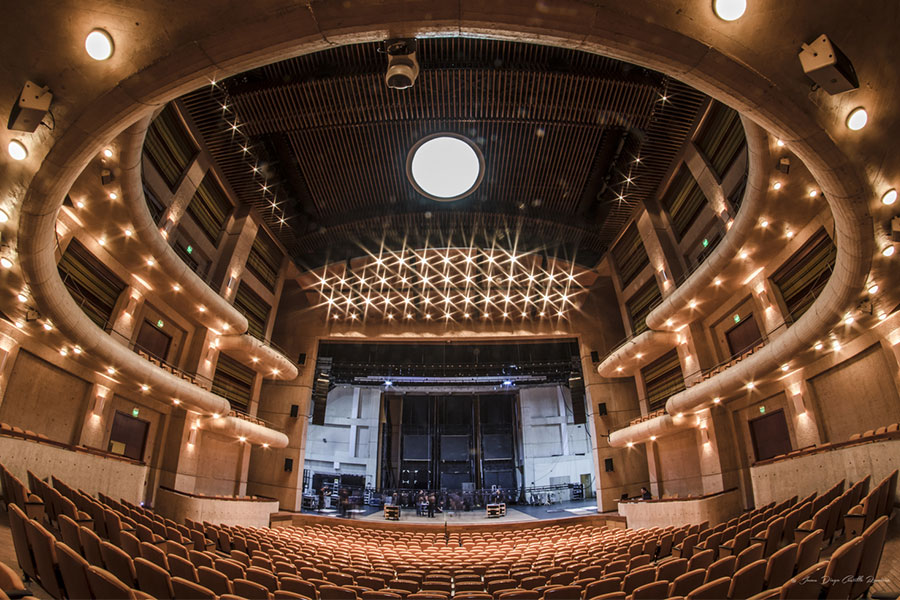