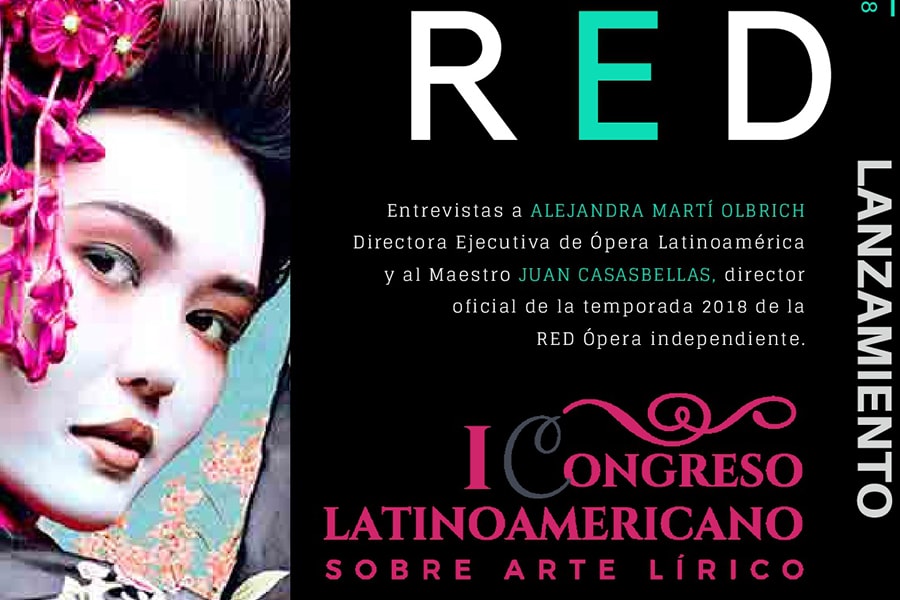 In its first edition, the magazine Alma Lírica rescues the contribution that has been the work in the development of lyric talent and the circulation of productions in Latin America

For some years, work in the world has become a great tool driven by the sectors that are looking to grow. Considered as a safe weapon of growth, the network of collaborations is being used in art by the great Lyric Theaters that for a decade have been working to share training, productions and artists.

.
This work methodology requires maintaining certain common basic criteria, although each sector can create autonomously, when promoting exchanges it is clear that there is a need to unify criteria and also guarantee certain qualities.

.
It is important to consider that, in all aspects, the “everything” is more than the sum of the parts. When working in a network, synergies are generated, elements that result in something greater than its simple addition are integrated. The qualities of each of the elements of the network are harnessed and maximized, the strengths are replicated in the other members and the weaknesses are diminished thanks to the strengths of the rest.

.
In turn, trust is inspired to the other members and the actions taken by each of the parties are legitimized, which become group decisions, designed towards a common goal, such as associativity.

.
On the other hand, current times require a better negotiation. In art, no production, whether official or independent, can afford to take false steps, committing to things that can not be fulfilled later can be catastrophic, especially for a small company or one that is starting. This also applies to works that are not done, fees that are not paid, etc. Therefore, the bigger we are the easier it is to negotiate and the better conditions are achieved for all parties. Belonging to networks of work simply makes us stronger.

.
Cooperation is another elementary point. The needs are many, but many times they are the same. The situation may be a solution already found, creativity is enhanced, there are more heads, more ideas, more points of view, but all point to excellence, therefore, everything flows better, because all the actors fulfill their role better.

.
There is a greater projection, better information and an incomparable wealth generated by diversity, because working in a network does not mean to go around as repetitive soldiers, but on the contrary, it proposes to contribute from each one the best, in pursuit of a superior whole.

.
Implementing this type of collaborations, is a more fun development space, where achievements are shared and celebrate, where it seeks to optimize time, money, work and effort. It points to a common growth in the search for solid tools and an awakening of collective creative thinking.

.
Within a time, everyone who is not willing to work in a network will be out of the system; that is why generating collaboration networks that adapt to each stage is elementary. In art, where individuals are supposed to be more creative, we can not afford individualities anymore. We can not continue pondering the ego as we can not allow those egos to limit common growth.

.
The world of poetry needs a drastic change and today the light is being seen through cooperation and joint creation. Each stage of art must have its place, its network, but in turn, it is essential that all networks connect, articulate, contribute to others, respect, recognize and nurture, in short: give the example.

An association of theaters

.
It was founded in 2007 in the Municipal of Santiago de Chile along with other theaters in Latin America. During its first 10 years of life was an Organization dedicated to maintaining the relationships of theaters around the co-productions and circulation of shows between the Region and with other theaters of the world.
In March of the year 2017, at the OLA meeting held at the Teatro Colón in Buenos Aires, the Assembly of theaters determined to constitute the legal personality of OLA with permanent headquarters in Santiago, Chile.

.
Nowadays, the Association has more than 25 institutions from Argentina, Brazil, Chile, Colombia, Ecuador, the United States, Spain, Mexico, Peru and Uruguay. He installed a permanent executive administration that is leading an innovative process of developing projects and services for members and associates.

In 2015, the Organization began to plan its strategic development for the next 10 years. Five axes of action were determined. Among them: associativity, exchange, training, accessibility and technology. Since then, work has been started on managing alliances and developing specific projects for each of the axes. Many of these projects and alliances are being translated into projects and services to the members, taking advantage of economies of scale and the benefits of the greater bargaining power of a sectoral association.

.
The OLA relationship model; Based on the collaborative economy, which is increasingly strengthened in the creative sector, gives us interesting results.

.
The vocal coaching tour co-organized by the Royal Opera House in London and OLA, held in 2016 in the cities of Buenos Aires, Santiago, Rio de Janeiro and Bogotá, resulted in the Chilean singer Yaritza Veliz being selected as Young Artist Program of the English Coliseum. Type of exchange possibilities for our Latin artists that have only been possible thanks to networking.

.
Another success story is the recent alliance signed between the Teatro Real de Madrid to bring their shows via streaming to the Las Condes Theater in Santiago de Chile, which will provide as a benefit an opera program of excellence to a theater that does not produce operas and for consequently almost inaccessible possibilities for the neighbors of that commune.

.
The recent agreement signed between the Accademia del Teatro alla Scala in Milan and OLA, will soon take prestigious teachers to the San Juan Bicentennial Theater who will be the first to give body to this recent agreement.
Finally, and just because we can not cite more examples, the Chilean government fund obtained by the Association for the development of the platform Escena Marketplace points to a paradigm shift. Change that introduces as its main innovation breaking barriers and opening the offer of shows to the world through a universal access marketplace, without having to belong to a particular network.

Latin America represents a continent of 19.2 million km² that houses more than 130 theaters for over 600 seats, more than 140 symphony orchestras, 300 music conservatories and another 300 ballet and more than 40 opera festivals. All this translates into a huge virtuous ecosystem that unfortunately is totally disjointed and disintegrated. Oblivious of all impact of the benefit of associativity.

.
As one of the first specific measures to improve articulated regional work, OLA decided to take an important step and carry out in the Colón Theater of Buenos Aires in March 2018 the first meeting of technical directors of the Region. Unpublished meeting that takes place for the first time in the 10 years of the Association’s life and that moves towards the real and transparent realization of networking.

.
The prestigious Argentine Coliseum will receive more than 20 technical directors from the 11 countries of OLA for this meeting. The work agenda includes addressing key issues to establish a common circulation policy such as the customs system, fees, visas for artists, among others.

.
The planned agenda will start with the exhibition of cultural goods export policies in each of the OLA countries. For this, each of the countries has made a specific report of their country that will be shared in the meeting. This panel will feature the important presence of Mauricio Wainrot, General Director of Cultural Affairs of the Argentine Ministry of Foreign Affairs. Key link with the government sector that begins the work of OLA in the change of current policies and future regional approval.

.
During the two days of the day will review the main problems that have the theaters and associations when circulating a production by one or more countries in the Region. This with the intention of reaching a petition for approval of public policies, customs and visas. At the level of administrative management will also deal with issues to be agreed as contracts, methodologies, with the idea of ​​concluding with a toolkit or OLA export manual.

.
The meeting of Technical Directors is an unprecedented milestone in the 10 years of the Organization’s life. The high participation and its realization speaks of the goodwill and support of the network towards the work that has been done. We have no doubt that in the coming years many theaters will be added to this way of working, since it only augurs positive results for those who integrate it.

Since March 2017, OLA has strengthened its corporate governance and expanded the incorporation of new members in order to extend its impact and services to a larger segment.

.
Marc Scorca, President of the Opera América association, which has 150 theaters in North America and Canada, and Nicholas Payne, Executive Director of Opera Europa that brings together 180 theaters mainly from Europe, participate as advisers.

.
* Courtesy of the Lyric Soul Foundation

.
Check this and other articles in the online version of Alma Lyric Magazine at the following link.