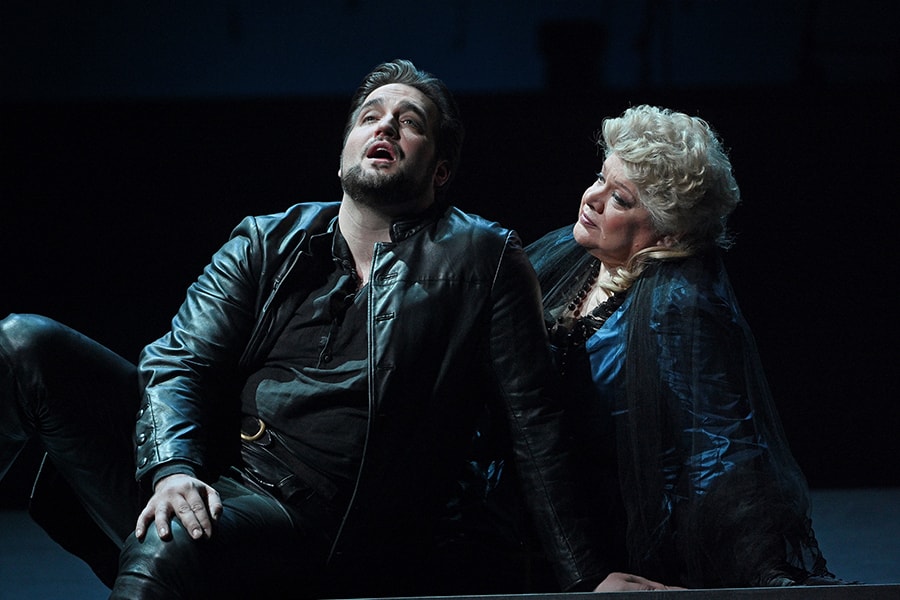 The production with more than 230 artists – 147 people on stage and 91 musicians – will be broadcast on April 10. It will also feature the choreography of Gheorghe Iancu, along with a vast team of dancers led by the soloists Alessandro Riga and Letizia Giuliani.

.
The Gioconda of Amilcare Ponchielli returns to Gran Teatre del Liceu from April 1 to 15 with the spectacular production of stage director, set designer and costume designer Pier Luigi Pizzi that excited the spectators in 2005. The maestro Guillermo García Calvo debuted at the Liceu and also with this opera full of lyricism that will feature a cast of first level led by the soprano Anna Pirozzi. On the stage they will be accompanied by tenors Brian Jagde and Stefano La Colla as Enzo Grimaldo, mezzosopranos Dolora Zajick and Ketevan Kemoklidze as Laura Adorno and bass Ildebrando D’Arcangelo and Carlo Colombara as Alvise Badoero, among many others.

This work, emblematic of the period between Verdi’s maturity and incipient verismo, is the most celebrated score by Amilcare Ponchielli. In addition to the famous “Dance of the Hours” and the suicide aria of the Gioconda, the score hides moments of great post-Romantic lyricism and sensibility, as well as the masterly orchestration and vocal writing for roles such as Laura, La Cieca, Enzo Grimaldo or Barnaba.

Streaming to cinemas
On April 10 122 cinemas around the world will be able to live the opera La Gioconda in a co-production of the Liceu with RTVE, Mezzo and the production company Les Films Jack Fébus. In addition, ahas been made for the broadcast, special program presented by music journalist Eva Sandoval which will accompany the broadcast with interviews to the artistic team of the opera and the theater, Iréne Theorin, Dolora Zajick, Brian Jagde, Pier Luigi Pizzi, Guillermo García- Calvo, Francesco Marzola and Christina Scheppelmann. The broadcast, which is done in collaboration with the distributor Rising Alternative and the Live in Cinemas program, consolidates the Liceu audiovisual project internationally and contributes to the dissemination of the opera to new audiences and cities with little programming of this genre. The emission will have special repercussion in Spain, where it will be able to be seen in 69 rooms, 21 of them in Catalonia. The other countries that can enjoy this famous opera will be Germany (3 halls), Andorra, Austria, Canada (6 halls), Denmark (9 halls), Slovakia (10 halls), United States (5 halls), Holland, Italy (8 rooms), Portugal (2 rooms), United Kingdom (5 rooms), Czech Republic and Switzerland.

The time stopped, exhibition in the Balcony Foyer
La Gioconda,besides having all the ingredients of a great opera, includes one of the most popular ballets known to the general public: the Dance of the Hours. This musical tribute to the passage of time and the passage of time helps us to make a different reading of the work of the painter Gloria Muñoz, who will be the protagonist of the new exhibition at the Balcón Foyer El tiempo detenido. If the music of the ballet of “the dance of the hours” represents and divides the hours in four stages: aurora, day, afternoon and night, thetime stoppedin the paintings of Gloria Muñoz is the art of emotions, passions and restlessness.The time stopped, these immobile instants where the elements that compose them remain as an image that time no longer matters to them.