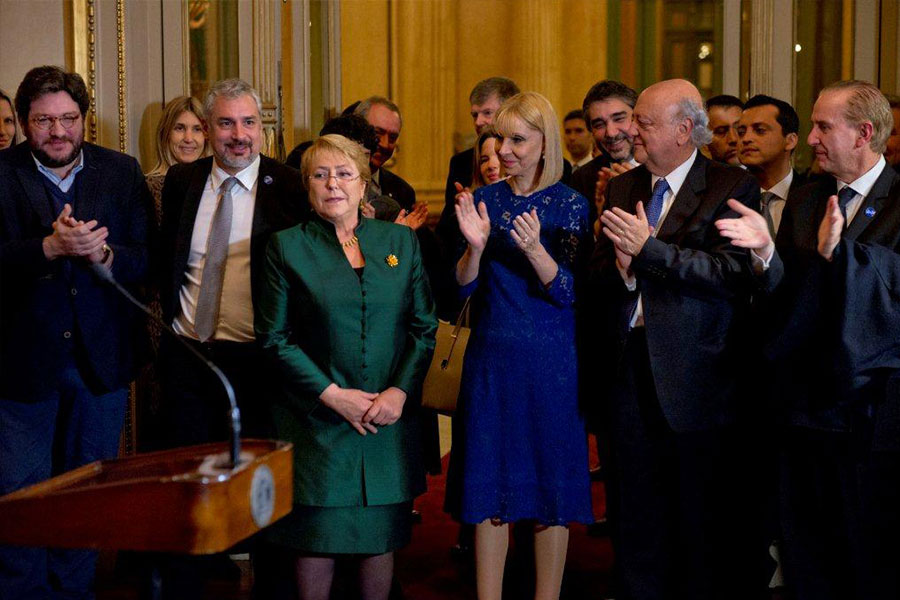 The concert was attended by the President of the Republic of Chile, Michelle Bachelet, María Victoria Alcaraz, General Director of the Teatro Colón and President of Opera Latin America as well as Chilean and Argentine authorities.

“Thank you from the bottom of my heart that just in the government of a woman this year is decreed as the year of Violeta Parra.” Those were the words of Javiera Parra, granddaughter of the honored singer-songwriter to whom Chilean and Argentine artists paid tribute on Wednesday, July 19, for the hundred years of her birth, before a crowded Theater of Buenos Aires, which also had the presence of the President of the Republic of Chile, Michelle Bachelet and authorities of both countries.

.
“Violeta Sinfónico” was the name with which a handful of artists from Chile and Argentina, and the Stable Orchestra of the Teatro Colón sang to the Chilean artist in one of the most important stages of Latin America. A moment full of emotion and songs performed by musicians such as Sandra Mihanovich, Soledad Pastorutti, Gepe, Javiera Parra, Beto Cuevas, Camila Moreno, Roberto Márquez, among others, under the artistic direction of Ángel Parra and the orchestral arrangements of the Maestro Guillermo Riffo.

.
“Both the Chilean and Argentine community have had a very special moment, and I think this is a very important commemoration. Violeta Parra was a great woman, a great fighter, concerned with the human, sometimes with the divine, and with the pains and loves of our peoples. As a government we will continue organizing activities during this year, because we wanted the tributes to be all year long, not just one day, so that Violeta Parra’s voice is also present in the new generations, ”said the President.

.
The Minister of Culture of Chile, Ernesto Ottone, highlighted the universal character of the singer-songwriter and the opportunity for this meeting to honor her. “This marks a milestone within the celebrations throughout the continent and the country. We are preparing another tribute in Santiago and in regions, and soon we will have surprises that of course cover music, but that go beyond, mixing languages ​​and genres as Violeta did during his life. The organization of this event has been a work of a long time, of many wills and convictions about the relevance of the figure of a woman who continues to inspire us ”.

.
That was how for more than two hours both musicians and attendees were able to sing and enjoy a repertoire composed of songs such as “The Rhine of the Little Angel”, “Marriage of Blacks”, “Back at Seventeen”, “La Jardinera”, “Thanks to life”, among others, demonstrating the universality of the singer-songwriter.

.
This unprecedented bi-national show was organized by the Chilean Embassy in Argentina, with the support of the National Council of Culture and Arts, the Teatro Colón, and the Ministry of RREE of Chile.

.
“Violeta syfónico” is one of the more than 350 activities coordinated by the National Council of Culture and Arts (CNCA) in conjunction with the Violeta Parra Foundation and her family to commemorate the 100th anniversary of the birth of the artist. This program – which runs from October 4, 2016 to October 4 of this year – seeks to disseminate the figure, work and legacy of Violeta Parra in the general public, and especially among the new generations.

.
The tributes to Violeta Parra continued on July 20 and 21 in Peru, with the presentations of the Bafona, stable cast of the CNCA that will mount “Song for a Seed” in the Grand Theater National Theater of Peru.