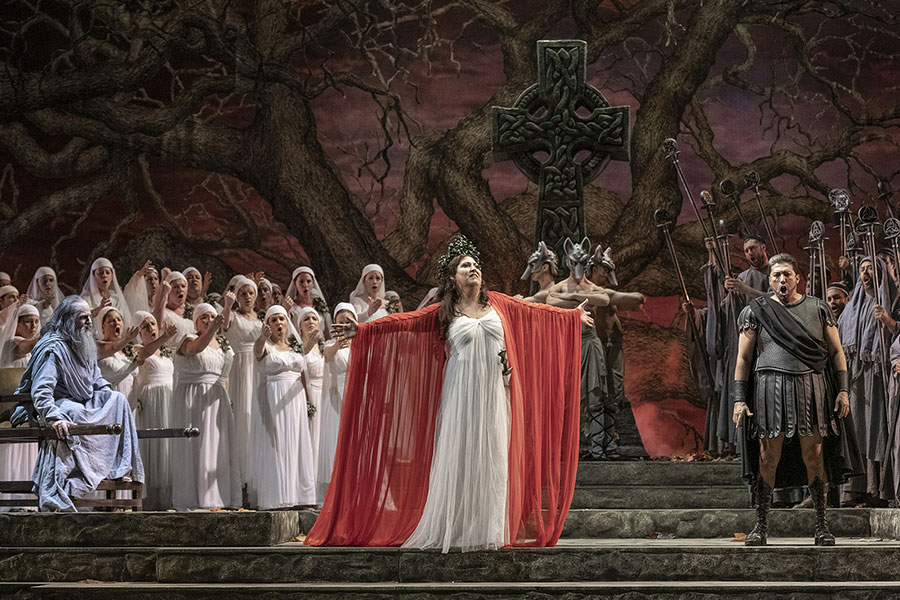 With stage direction of Mario Pontiggia and the musical direction of Renato Palumbo, la new production of Teatro Colon will perform four functions from 02 to 07 December

The four programmed functions will take place on Sunday, December 2 at 5:00 pm and Tuesday 4, Wednesday 5 and Friday 7 December at 8:00 p.m.

Premiered at La Scala in Milan in December 1831 and considered an example of the greatest height of the bel canto tradition, Norma is a lyrical tragedy in two acts with music by Vincenzo Bellini and Italian libretto by Felice Romani, based on the tragedy of Alexandre Soumet Norma, ossia L’Infanticide. His plot revolves around the love he feels for the Roman proconsul Pollione the priestess Norma; what leads her to try by all means to silence the rebellion against Rome, hoping that peace will be established and thus not lose her beloved.

ABOUT THE RÉGISSEUR
Mario Pontiggia was born in Las Flores (BA). Architect (UB) and Régisseur (Higher Institute of Art of Teatro Colón), he was the production director of the Opéra de Monte-Carlo and artistic of the Opera de Las Palmas de GC. ; He currently heads the Alfredo Kraus International Foundation.

ABOUT THE MUSICAL DIRECTOR
Carried by the passion and the call of music, Renato Palumbo soon devoted himself to the study of singing, orchestral and choral direction, piano and composition; along with a passionate interest in all aspects of the Opera until his debut on the podium with Il trovatore when he was only nineteen. From that moment, Renato Palumbo embarked on a great career, interpreter of a large repertoire, invited to the most important international theaters, such as the Teatro alla Scala in Milan, the Opera de la Bastille in Paris, the Covent Garden in London , Barcelona, ​​Madrid, Washington, Chicago, Berlin, Tokyo, Bilbao, Genoa, Cagliari, Turin, Parma, Florence, Venice, Naples and the Verona Arena.

The vocation of Renato Palumbo is related to a non-dogmatic attitude but strict and absolute respect for the score, and focuses on the aspect of dramaturgy of melodrama and its evolution throughout the European scene, from Rossini to Marschner, from Donizetti and Bellini to Verdi, Meyerbeer, Puccini and Giordano. With the same spirit, he dedicates himself to symphonic music, from Viennese classicism to Mahler and Hindemith, through the great romantic and pre-romantic German repertoire: Dvoràk, Grieg, Tchaikovsky.

Another notable peculiarity of Renato Palumbo as a conductor, didactically speaking, is the interest in melodrama from the vocal point of view.

His upcoming commitments include: Rigoletto in Turin and Florence, Anna Bolena, Ernani in Sydney, Traviatin Bologna and Washington, Tosca in Beijing, Barbiere di Siviglia, Cavalleria rusticana in Bari, and Norma in Buenos Aires.