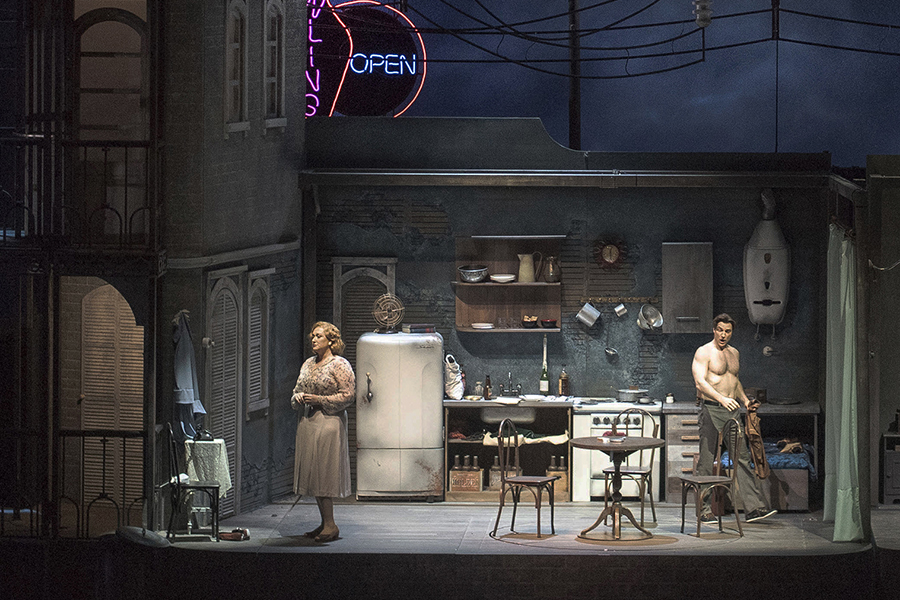 Composed by the recently deceased pianist, conductor and composer André Previn, the lyrical version of the Tennessee Williams classic arrives for the first time on the stage of the Teatro Colón in 4 roles under the direction of Rita Cosentino.

.
In 1995 the American composer of German origin André Previn, was inspired by the iconic work of the playwright Tennessee Williams to compose his first opera with libretto by Phillip Littel and released in 1998 at the San Francisco Opera. The opera of three acts takes place in Elysian Fields, New Orleans, in the department of the classic characters Stanley and Stella Kowalski who receive Blanche DuBois, sister of Stella.

.
The international cast is made up of the Irish soprano Orla Boylan, playing Blanche DuBois while the American baritone David Adam Moore will be in the shoes of Stanley Kowalski and the soprano Sarah Jane McMahon will be Stella Kowalski making her debut at the Teatro Colón.

About Rita Cosentino
Born in Buenos Aires, she studied dance, acting and drawing and painting at the National Academy of Fine Arts of Buenos Aires. In 1997 she graduated from the Higher Institute of Art of the Teatro Colón in Opera staging.

She debuted with La Serva Padrona by Pergolesi, in 1998, followed by Amelia al ballo and The Telephone by Gian Carlo Menotti, Werther by Massenet, Rigoletto by Verdi, Madama Butterfly, Gianni Schicchi and Il Tabarro by Puccini, Eugenio Onegin by Tchaicovsky, Iphigenié en Tauride de Gluck, this last nominated for the ACE Awards 2008/2009 in Buenos Aires. He was in charge of the world premieres of the operas Parodia by Pablo Ortíz and Tenebrae by Alejo Pérez, both for the Colón Experimentation Center and the FIBA; and the Java Suite by Agustí Charles for the Sec Room in Barcelona, ​​the Castell de Peralada International Festival and the Theater Kleineshaus in Basel.

About David Brophy
He was born in Dublin and graduated from the Dublin Institute of Technology and Trinity College in Dublin. After further study in Ireland, England and Holland, he was appointed Apprentice Director of the Chamber Choir Ireland and later became Assistant Director of the RTÉ National Symphony Orchestra of Ireland. Former Principal Director of the RTÉ Concert Orchestra, David now has a close relationship with both RTÉ orchestras and is regularly invited to direct the Ulster Orchestra. His career expands across Europe, Africa, the United States, Canada and China.

His work as a specialist of contemporary groups, including Vox 21 and Crash Ensemble, led him to direct numerous world premieres including Music for Eighteen Musicians Steve Reich’sand A Streetcar Named Andre Previn in Ireland, along with world premieres such as arranging Nico Muhly for Iarla Ó Lionáird. In the opera field he has had successful collaborations with the Lyric Opera Productions, Opera Theater Company, Opera Ireland, Glasthule Opera and Northern Ireland Opera, he made his debut with the Ballet of Ireland with a new production of The Nutcracker by Tchaikovsky. In addition, he collaborated in a concert with the actors Brendan Gleeson, Fiona Shaw and Stephen Rae. In the United States he directed the Atlanta Symphony, the Buffalo Philharmonic, the Nashville Symphony, the Pittsburgh Symphony, the Washington DC National Symphony Orchestra, the Valdosta Symphony and the Naples Philharmonic.