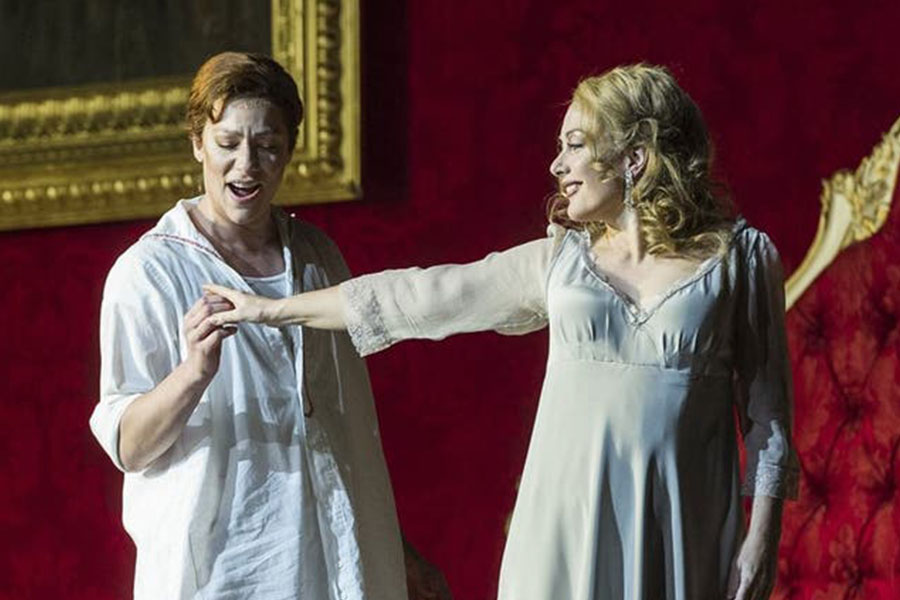 The successful co-production of the Metropolitan Opera House in New York, the Royal Opera House in London, the Teatro Regio of Turin and the famous Argentine Colosseum premiered on July 18 with great success.

“The staging of Robert Carsen who arrived at the Teatro Colón fully assumes this Viennese genealogy. The scene of the first act, with a wonderful set design by Paul Steinberg, brings eighteenth-century ornamentation to the height of the stylization. But at the same time it is a stylized, somewhat provincial styling, with that condition that Vienna never lost despite being the capital of an empire. In the second act, on the contrary, dominates a deprivation of the ornament that takes its matrix from the design philosophy of the architect Adolf Loos. There is no hiatus and the contiguity that exists between the two scenographies and the two acts is the same that exists between the emblematic house of Loos and the surroundings of the Michaelerplatz, very eighteenth century, in which it is located. As for Act III, we should start by saying that at no other time was Hofmannsthal more thorough than in those scenic indications. Converting, as Carsen does, an inn in a brothel may seem excessive, but anyway these functions used to be confused also outside the stage, and the decision is in some ways a success if it is thought that it approaches, with all right, the world of Rosenkavalier to Arthur Schnitzler.

.
The knight of the rose has no pronounced dramatic curves. Rather, the orchestra and the voices are here like a huge silk mantle in which very slight folds, sinuosities are produced. The direction of Alejo Pérez at the head of the Stable did not let any of these minimal reliefs go unnoticed, he shaped each inflection without the slightest exaggeration, without embracing or agitation. The same goes for waltzes, and all Rosenkavalier can be heard as an incessant, metastatic waltz: the body says what the characters cannot or do not mean. Hofmannsthal, who had also indicated dances in the librettos of Salome and Elektra, used to insist that the movement of the body, even of the underlying rhythm, served to uncover the veil of worldly manners.

Keys of a version

But there is no Caballero de la roda without the voices indicated and the version of Columbus did not have fissures on this flank. In the role of the Mariscala, the soprano Manuela Uhl not only had a very fine vocal performance but her timbre transmitted that desolation of a piece that defines her character, beyond any frivolity. His monologue was exceptional at the end of Act I but, in general, all his work was covered by a content drama that revealed the Mariscala as what it is: a prey of time and a slave of transience. Although it may not seem like it, Baron Ochs also want to win an impossible race. Bass Kurt Rydl sang (and recorded) that role so many times over the years that he really knows about law and vice versa: there were lubricity and despair in sight, the combination of which results in ridicule. For his part, the mezzo Jennifer Holloway fulfilled, just as Darío Schmunck as the Italian tenor and John Hancock in the role of Faninal. Octavian is drawn on the profile of the Cherubino of Marriage of Figaro de Mozart, although in this case the sexual ambiguity is extreme: Baron Ochs does not tolerate seeing the same face in a man and a woman and being attracted to him. Oriana Favaro made a Sophie who grew from opportunism to loving surrender. The three (Uhl, Holloway and Favaro) shone in the wonderful third of Act III: one could almost resign himself to the temptation to think that the whole opera is a long and colossal excuse for that moment. There is Strauss’s true stroke of genius.

It is worth remembering pianist Glenn Gould, a Straussian of pure strain. Strauss’s greatness resided for him not only in the superior craftsmanship, let’s say, of his music, but also in that he was “a central figure in the decisive dilemma that aesthetic morals pose today: the confusion that derives from trying to articulate the inscrutable pressures of artistic destiny with the sum of a collective chronology. ” In the waltz, Schönberg and Strauss meet. Towards the end, the Mariscala confesses: “It’s a Viennese masquerade, and nothing more.” That phrase contains a figure: that of a world in which temporalities are confused in the same and single surface. ”

Gianera, Pablo. (July 21, 2017) The knight of the rose: the return of the great Viennese masquerade. Buenos Aires, Argentina: La Nación online. address from where the document was extracted.